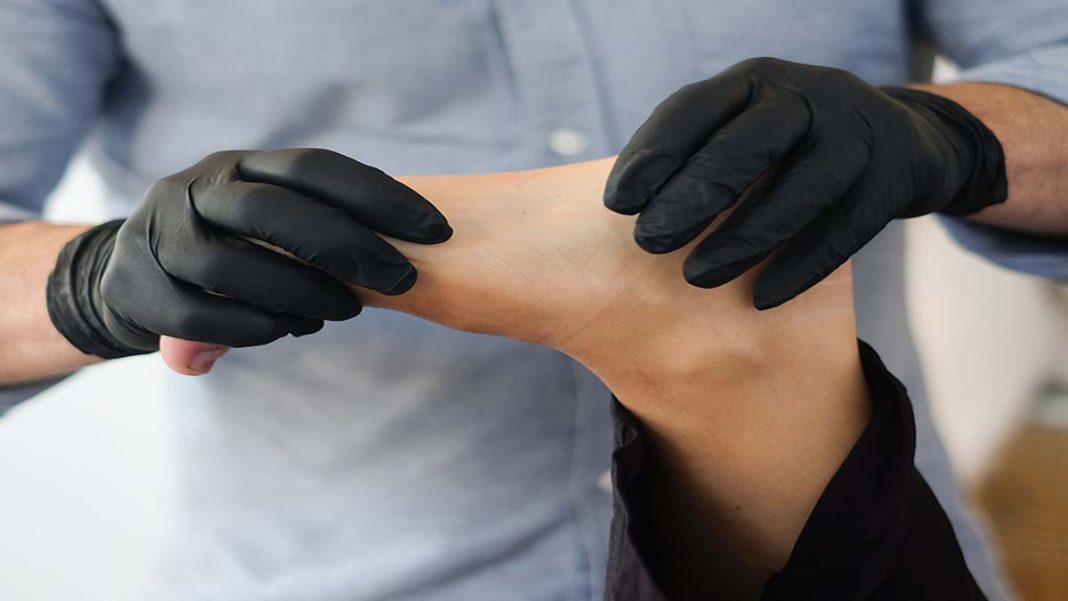 In early September 2019 while I was in the end of my preparation for Berlin Marathon after my last long run I pulled my right calf.  After intense physiotherapy treatment I managed to get over it and I was able to run the Berlin Marathon of 2019 and hit a new PB.

Early October 2019, 1 week after my Berlin marathon I went for my first run and after that I felt that was something wrong, below my right ankle, I was feeling the side of my heel numb and while I was touching by going up and down on my Achilles tendon, calf and below my ankle an electric sensation was going through it and ending on the side of my foot below the ankle.

The feeling of Sural Nerve Injury started to get worst and it was an irritating feeling and any shoes I chose to wear were causing me an uncomfortable sensation.  I had to change shoes until I found my most comfortable shoes that were creating me the less irritation during the day at work and to my other daily activities.

I first visited my Physio and he massaged the area and he couldn’t find anything wrong there related to the joints, tendons or muscles.  He suspected that it may be a sural nerve entrapment and he suggested me to visit an orthopedic doctor because after the healing of my pulled calf a nerve may be entrapped in the fascia tissue as he suspected..

Eventually I visited an orthopedic doctor and he diagnosed me with a sural nerve entrapment and he said that if it does not go away after a while usually this is resolved a small surgery.  I knew that this is sural nerve injury happened from my running training through overusing my running muscles so I thought I will give it a go with all the physical ways I have a choice to do before I place any thoughts for going under any operation.

So I placed all my energy and mass action to try to get rid of that without any operation.  The good thing and lucky enough, it was no pain while running, just little irritation while warming up and then that sensation was lost until I stopped running.  So I continue running normally and I was executing easy runs and even easy long runs to maintain my aerobic endurance.

During the day at my normal daily activities, the sural nerve injury was becoming worst and an uncomfortable sensation was really giving me a bad day and it was becoming less during the night after I was having a warm shower and massaging the area around the calf and ankle.

So what I did to get rid the sural nerve injury symptoms was the following:

Action 1: One visit to physiotherapy per week, he was massaging the affected area and was pressing really hard the point that he suspected that the sural nerve was entrapped – under the ankle!!! Be prepared for a lot of pain by the physio pressure!!!

Action 2: My physio suggested to visit once per week my chiropractor to open the ligaments around the heel, ankle so he will make easier for him to work.  My chiropractor was doing some magic movements and was stretching my foot, working around the affected area with a tool named Ergo Myofascial Releaser Tool (look below in amazon).  He was also doing me some exercises to floss the nerve.

Action 3: My physio advised me to start stretching it up to the point I could stand the pain, start strengthening exercises on the area around and start foam rolling the area.  So I created the following 15-20 minute routine twice a day, before work and before my evening shower:

I was always start foam rolling my right calf until I started feeling the electric sensation to be quite less.  On the spots I was feeling knots of the fascia, I was holding there for 30 seconds and release until I could felt the calf really relaxed.  Actually I was preparing the area to be more receptive to the stretches and strengthening exercises I was going to perform next.  Probably that will take you 5-10 minutes.

Three exercises that my chiropractor showed me to floss the nerve. Those are similar to those shown on videos below

Strengthening exercises: Elastic band to strength and stretch the calf while lying on my mat.

One choices of Bands below you can use:

Massage the area: I have performed massage over the area using Organic Moringa Oil to massage the calf, pressed gently the heel and below ankle area and try to break any small knots I could find around the area.  I could find lots of small knots below the ankle that I was pressing and holding them until they got smaller.  Physio was working them by applying them lots of pressure, that was kind of painful but in the end appeared to be effective!!

Followed my doctor’s instructions and I purchased Vitamin B12 – I was taking these B12 vitamins for 2 months.

Warm shower around the area was always making me feel better.

Another choice of Bands you can use:

Another tip is while I was sitting at the office or sofa at home I would do ankle stretch to calm down my sural nerve injury – similar to  video of Peroneal Nerve Glide every hour or every time I was feeling that the irritations was getting worst.

After 2 months of following the above, so actually around of January 2020 the 90% was healed and today while I am writing this article there is no irritation in the area at all.  Sometimes the irritation is coming back if I wear really tight shoes that is pressing the point below my ankle.  You need to be patient and work on it and hopefully you will be as lucky as me and manage to release slowly slowly the sural nerve entrapment.

**Above I am clearly describe my personal experiences and definitely is not a professional advice and you must always seek advice from your personal doctor and medical professionals as i did myself.

Aerobic training as any other kind of training falls under the law of specificity, that means your body will adapt to the...
Read more

Stability Running Shoes For Men of 2022

If there is one lesson that I have learned well as a runner, it is that: Choosing the...
Read more

"If you're tired of buying and testing hydration belts to identify the one that will be more suitable for your race...
Read more

Bringing you the latest running news, fitness trends and motivational stories right to your inbox.

We are a team of Running & Fitness enthusiasts that we love to share our knowledge and personal experiences with other like-minded people. We do our best to provide you with the latest running and fitness news with the purpose to encourage the healthy lifestyle and benefits of the sport of running.